By Solutions ITSeptember 27, 2018 No Comments

Advances in educational technology are opening up more and more opportunities to engage students in innovative and collaborative learning experiences. In many primary schools, this starts from the first day of Foundation, with teachers using screens and projectors to lead activities, and students navigating their way through iPad apps. For kids in the later years of primary school, the use of technology gets more sophisticated, as they start taking responsibility for their own projects and presentations, in preparation for the transition to secondary school. To better understand the role that Vivi is playing in this evolving educational landscape, we spoke to teachers at three primary schools to find out what they love about using Vivi, and how it’s changing the way they teach and the way their students learn.

Ease of use for teachers, tech savvy or not

According to Matt Markman, from Melbourne’s Roxburgh Homestead Primary School, Vivi’s usability and seamless screen-mirroring performance have driven greater integration of technology with everyday lessons. “Literally, you just sit down, you open up the application and cast your screen to the TV, and you can use it across any platform,” he says. The school previously used a range of different presentation systems, including interactive whiteboards, but “they were very cumbersome and very complicated for teachers to learn how to use them.” With Vivi, however, “teachers have been able to use it with pretty much zero teething problems.”

He points out that “even teachers who may not be as confident with that sort of technology are able to just pick it up. Technology is definitely being used more as a result.”

Natalie Harris from St Francis de Sales School, a Catholic school in the Sydney suburb of Wooloware, tells a similar story. “Vivi’s used across the school. If you go into another classroom it’s so easy to connect because everyone’s got the same technology.” And for Harris, this ease of use means she can be more efficient, not only saving time that was previously spent fiddling with cables and adaptors, but being able to use her device privately while Vivi is streaming a video or displaying other content to the shared screen.

“I might be wanting to get maths ready, but previously I couldn’t have because the children were using the screen for something else,” she says. “Now with Vivi, I can put a lesson up, go back to my computer and do things without the children being disrupted.”

Ease of use for students of all ages

Vivi’s intuitive design makes the app simple to use for students too, right down to the youngest kids. Harris’s Year 1 students, for example, have one-to-one iPads, and they took to Vivi straight away. “They engaged with it really well. Now I just say open up the Vivi app and they’re really good at knowing that they have to swipe up to turn Airplay on and connect to the classroom.” Markman backs this up. “It’s so easy to use, it doesn’t really discriminate between the young kids and the older kids.”

Teachers at St Peter’s Anglican Primary School in Campbelltown in Sydney have had a similar experience. Dean of ICT Stuart Connell helps the teachers integrate technology into their lessons, but also takes his own classes in ICT, so he’s uniquely positioned to see how kids interact with Vivi. “The young kids are like sponges,” he notes. “Vivi is just another app to them. They know where to look for the room code so all they need to do is find their classroom number and punch in the code.”

All three teachers say that Vivi has opened up new opportunities for collaborative work in the classroom. “Having students present their work to the screen allows for immediate feedback from teacher to student, but also student to peer feedback,” says Connell. “We can all collaborate on what that student’s been working on. It’s a new element to the classroom that we haven’t had before.” Markman tells a similar story, with students presenting their work and receiving feedback in real time from their teacher and their peers.

From Harris’s point of view, Vivi enables her class to learn together as a group in ways that were previously impossible. “When the children finish a writing task in their books, I get them to film themselves on their iPads reading their writing,” she explains. “Then we pop that up onto the screen and the rest of the class get to listen to their stories. And that’s when we can give feedback and say, that was good, you need to put a full-stop here, etc.” Harris also puts Vivi’s Capture Screenshot feature to good use. “If someone’s written a really good sentence, we use the app to capture it on each student’s iPad and I can say, ‘Can you underline the noun? The verb?’ And so on.”

Harris’s young students also use Vivi to lead collaborative learning themselves. In one recent example, the class was working on information reports and one boy needed to find some information about crocodiles. With his iPad connected to Vivi, he started exploring the Taronga Park Zoo website and soon several other students had gathered around the screen to take their own notes. “I didn’t lead that. He just asked if he could search for more information, we connected him to Vivi and it got the other children going, ‘Oh, I needed that too!’”

It’s a neat illustration of how Vivi gives students greater control over how they learn. By sharing their work, responding to their peers’ work or using interactive features like Capture Screenshot on their own devices, they become proactive rather than passive, and this helps to keep them engaged with lesson content. It builds their self-esteem too, as Harris points out: “When a child’s done well, we can put their work up on the screen and they’re proud of it, seeing their work up there.”

Giving teachers the freedom to move

A big change that all of the teachers have noticed is how Vivi has freed them up to move around the classroom. They can now leave the front of the room and interact with individual students without interrupting their lesson or giving up control of the screen. “Most of our teachers were so used to having their laptops set up on their desk or on a table right near the screen, because that’s the best Wi-Fi spot or it’s where the HDMI cable is,” says Connell. “It’s just been so easy, and so much better, for them to be able to walk around, have the kids interact with the iPad that the teacher’s holding or use their own devices to project to the screen.”

At St Francis de Sales it’s completely changed the way their classrooms function. “Gone are the days that the teacher’s behind the desk and stationary,” says Harris. “We don’t have a desk at our school anymore! We just have a device and move around the room, instead of being stuck to a desk and stuck to a hole in the wall. The only time I have to plug my laptop in is when my battery dies!”

It’s a far cry from the rigid old model of the teacher dictating lessons for rote-learning by passive students. In a Vivi-enabled primary school classroom, teachers can be much more flexible, responding to the needs of their students and bringing lesson content alive, with technology and with human interaction.

Vivi’s potential for education and inspiration isn’t confined to individual classrooms. One of Vivi’s most powerful points of difference is how it brings a school’s screens and devices together as an integrated network. Vivi features, such as Digital Signage, Analytics Dashboard and Emergency Broadcast, make specific use of this. But the network can also be used for whole-school communications that bring the school community together. For example, Roxburgh Homestead use Vivi to broadcast footage of their principal reading a book to the entire school. And in a digital-age nod to Harry Potter, they’re planning regular whole-school broadcasts of their house points leaderboard!

Yet another Roxburgh Homestead initiative gives arguably the most exciting indication of what’s possible with Vivi – the time they connected Vivi to a drone and put on an air show! “We were able to fly a drone and give the students a bird’s-eye view of the school,” Markman explains. “All we had to do was have the iPad that was controlling the drone connected in to Vivi, and we were able to cast that to a screen. It was fantastic!” Proof then that for Vivi-enabled primary schools and creative educators, the sky really is the limit!

Interested to see how Vivi can offer a solution to your schools’ screen mirroring needs? 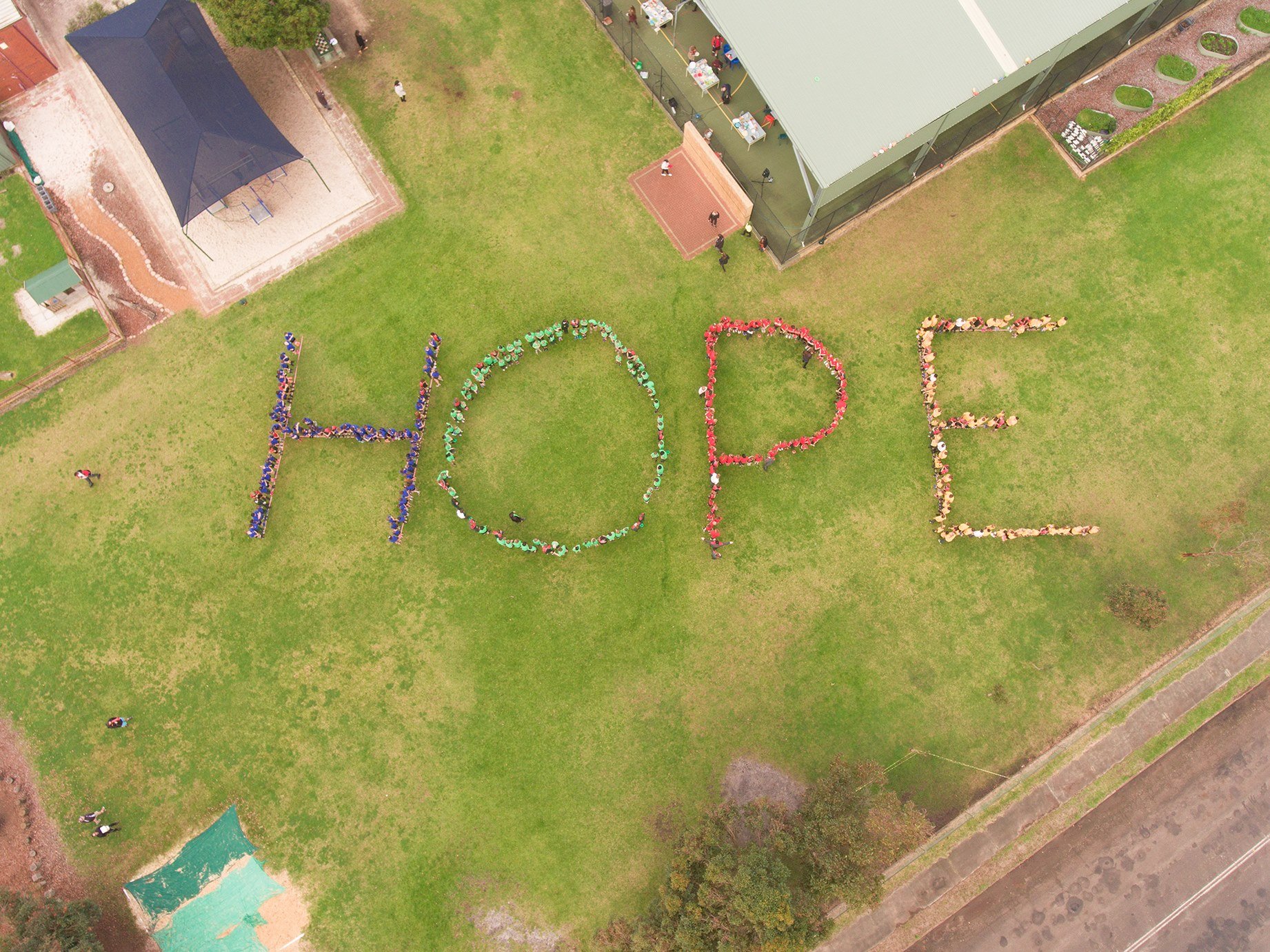